The pizzica, or, said in its most traditional form, pinches pizzica, is a popular dance attributed today particularly to Salento, but in reality it was practiced until the 70s of the twentieth century. throughout central-southern Puglia and Basilicata.

It is part of the great family of tarantella, as is used to call that variegated group of dances spread by the Modern Age in southern Italy.

This dance is linked to traditional rituals to treat those who, bitten – really or symbolically – by a spider, found relief for their sufferings by dancing until healing came.
Now that the phenomenon of tarantism has disappeared, this ancient meaning of the pizzica,
as a therapeutic dance, it has been transformed, but the dance scheme symbolically traces the act of crushing the spider and the liberating process that takes place with dance.

In the pizzica pizzica one dances in pairs, not necessarily formed by individuals of different sexes. Unlike what many imagine, the pinching pinch between man and woman was not necessarily a courtship dance.

For greater clarity, today we need to distinguish the shapes of traditional pizziche, which also varied from area to area, from those largely reinvented by youth fashion in use since the mid-90s, now referred to as “neo-pizzica”.
The traditional pizzica pinch belonged to the large family of the southern tarantellas: the basic figures were:

the dance (front)
round
the rotations
the figures tied by hand or by arms.
Postures and attitudes of the bodies were based on a strong and energetic body language, but also serious and ritual, typical of peasant culture.

The “neo-pizzica” has borrowed the most widespread forms of dance from folklore environments and the imitation of choreographed media models (tango, flamenco, etc.), enhancing the intentions and emotions of the dancers.
On some basic steps the dancers embroider, even inventing them, a great variety of steps and movements, which make the dance swing between phases of calm, of studying the other or waiting for more frenetic phases characterized by strong beats of the feet on the ground, fast and whirling turns on themselves, short pursuits, departures and sudden approaches and crossings between the two dancers. All seasoned by the euphoria of the sounds and shouts that are unleashed by the patrol, that typical circle, composed of musicians, aspiring dancers or curious, which is formed spontaneously giving life to the moment of the dance.

Characteristic of the pizzica pinch is the handkerchief, a must-have accessory in the clothing of the past, which was used at the time of the dance to invite, waving, the chosen partner. Today the belief that the handkerchief is “symbol of love” is very abused. It is more likely that it was used to animate the dance more.

In the pinch-pinching dance the roles, the sexes and their representation were and are very marked. Notwithstanding the fact that both dancers, both men and women, hold an erect and composed posture during the dance, the steps they perform vary and alternate between specular moments and “complementary” moments.
Women naturally have the task of expressing the best, even through the typical accessories of women’s clothing (skirts, scarves, shawls), their beauty and femininity, with steps much more composed than those of men, even if there are moments of euphoria with short runs and turns on themselves. The woman’s hands are often still holding the long skirt, and in any case her arms always remain closed, or slightly forward.
Man, on the other hand, naturally has the duty to express, during the dance, his manhood, his strength, his athleticism, and this task performs it with higher and more marked jumps, with drier and more sudden movements, with their arms stretched out and open as if to surround or embrace the woman from a distance. In any case, to make the dance more or less lively is the woman, who through small fugues, flashes, sudden stops and starts again, teases the man to chase her, to “braccarla” gently, and then tackle it with games of feet and looks. 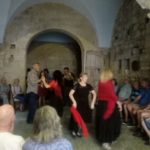 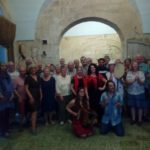 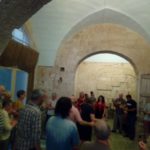 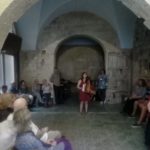 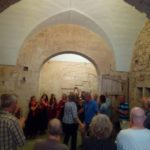 Your ticket for the: Pizzica experience